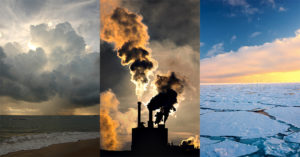 Global warming (global warming or heating) and many diseases (especially asthma, heart disease, children before birth, many diseases) and are responsible for raising social inequalities. Due to global warming, it has become a major challenge for people and property losses and diseases. According to World Bank Report 2014, if the temperature of the atmosphere increases to 2 ° C by 2050 as a result of global warming due to increasing greenhouse gases, then 70% of soybean production in the US, Central Asian and many countries and other grains, fruits and There will be a possibility of a reduction of 30-50% in the production of vegetables.

Some time ago the researchers of the American Thomson J. Doheji and Susan Clayton have confirmed that increasing heat and climate change are making human beings violent. The question is, if climate change is in place to make humans violent then who is responsible for climate change? According to physiology, if the body needs to be healthy then its basic nutrient needs are reimbursed. For a healthy body, restraint and regular routine are necessary. In the same way, it is necessary for human beings to act balanced with nature. Actually human nature is an integral component, which is fundamentally independent existence, but the physical nature is mutually influenced by the nature being relative.

The effect of atom bombs is accelerated, whereas the change from global warming happens gradually, but the severity of the effect can be seen equally in both. Lakes are the main danger to the most dangerous consequences of global warming. In the figures of the figures, about 150 lakes have been lost in the last decade. The ground inside the surface of the earth is raining. Future land will shrink with rapid growth. They will become big pits on it, the possibility of landslides will increase, which will cause significant damage to railway tracks, highways and big buildings. Cited on the basis of unique success. Man is doing something like addicts, which will prove to be fatal to the entire human community not only for him.

The saturn of satellites is accumulating in the sky, the land is changing in the desert. Man’s extreme extremism can only bear a limit. The most serious issue at this time is the heat. Due to mounting temperature, the world is worried over the irregular rainfall, due to the change of season, but what is the reason that no country is developing or is not ready to bring development changes. Our villainous lifestyle is facing the woes of the whole world. Countries with more population are becoming more and more affected. Diseases are being promoted by increasing temperature. Global warming has become a cause of many types of physical and mental illness. The dramatic changes undergone by the climate is due to the inhumane attack on nature by mankind. The artificial life created by mankind has caused extensive damage to nature. We have been paying rich respect to all these natural resources. Hence what is meant to be worshipped, cannot be exploited. Our Indian civilization is believed to have begun only on the bank of Sindh. So we ought to make it a part of our life and not destroy it.

There was a time when man used to identify himself as a part of nature and lived in complete synch with it. But Alas, Global warming is as big a threat to us as is terrorism. Terrorism is a gruesome attack of man on man but the climatic change is an attack inflicted by man on nature.  On the northern area, a large part of Asia, Europe and North America, the chemicals that have decomposed ozone in the sky have been formed. The sun’s ultraviolet light rays are coming from these very distant roads, which are increasingly spreading the skin disease, while agriculture and animal husbandry are also adversely affected. To stop the deadly rays of the sun, our scientists are no Anjniputra Hanuman, which they order and the problems are solved. Today, Hanuman is not there, otherwise he would take the sun light, by that time we would repair the ozone umbrella. To avoid the ultraviolet rays, we now have to hide the head in the sand by following the ostrich and following the ostrich. We can not leave the refrigerators and air conditioners, which is also responsible for the use of chloro floro carbon, to disperse the umbrella of ozone. Now their production is increasing. Instead of sitting in a neem shade, it is easy to sleep on a padded bed, where there is an airwoman. Where did the machine man so fast where he searched the trees?

The evergreen green plastic tree in the pot kept on top of the TV in the drawing room is feeling a green color. Five hundred and eight thousand meters high mountains in the form of Himalayas, due to the mountainous beasts of India, there is a gradual seasonal cycle of spring, summer, rain, autumn, spring and autumn in India. The climate is changing. A special change has been observed in this that rain is increasing instead of snowfall in the Himalayas. The situation is that it has started to rain even at very high altitude. As a result, the melting of the glaciers has also increased. In the last decades, there have been cases of heavy rains and cloud burst occurrences in the Himalayas. Recent studies have also shown that the hot winds have become more powerful. The days are getting hotter. The average temperature of the night has also increased. For the last few years, geology has been telling the increase in rainfall in the summer due to this change. Here we should also mention the report of the 2008 IPCC report that according to the trend of low rainfall and geology in the days of monsoon, it is a matter of drying of the swampy areas of South Asian countries. In the 1970s on the Himalayan region, a thorough research survey had proved that average elevation of 1 degree Celsius was increased in places of high altitude in the Himalayas.

The special point of this supervision was that temperature rise in elevated terrains was more than the lower areas. Scientists have also told that the water flowing out of melting of glaciers gets deposited in the lakes which are temporarily created. These lakes are very weak as structures and are very unstable. With a lot of water weight it suddenly breaks down and brings a terrible flood. This phenomenon is called Glacier Lake Outburst Fight (GLOF) in geologic language. Meteorologists, who are year-to-year, are not able to understand this mood of nature. It is no longer possible to make an assessment of the next month’s temperature. The temperature is continuously running above normal in two to three months of winter. The average amount of carbon in the air has reached dangerous levels of up to 400 parts per million. It is 43 percent more than the fixed standards. According to the report, the first 2014 was considered the warmest year, because during that time the average global temperature was 0.61 degree. But in 2015 this increase was recorded more than 0.70 degrees.