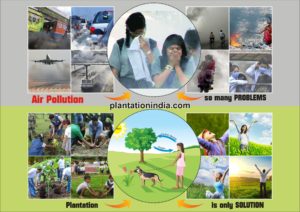 Air is the compound of many gases. Mainly it is nitrogen gas and almost 20% OXYGEN. Nitrogen is the principal part of food of animals and trees and plants.

Apart from this air consist of dust particles (SPM) and air vapour. If air has more than 400 RPM dust particle (SPM) it is dangerous. Carbon dioxide and Helium gas is also found in air in less amount. This air when mixed up with polluted gas endangers life. It is dangerous for the health of children and other living beings.

Plants and trees absorbs carbon dioxide and helps in keeping balance in the atmosphere but lopsided development of industries disturbs the balance and increases carbon dioxide content of air. Even vast sea cannot absorb it. The undesirable increase in the carbon dioxide gas leads to many dangerous disease.

like food and water. Global warming melts glaciers mountains. Water level of sea goes up and what will happen to inhabitants of these areas we can presume. It is a matter of grave concern.

All most all the countries in the world is affected by global warming.

Coal, oil and gas (natural fuels) produces maximum emission of carbon dioxide. Sea, vegetation and Earth soaks half of this emission. The rest spreads in the air and this is the main reason of global warming. Today carbon dioxide emission is 40 percent more than what its used to be in 1990. Thermal power units are biggest threat to pollution.

Existence of oxygen is the mother of all creations. The layer of air is above 1600 km from land. One to the gravitation force layer keeps itself attached to Earth. Near land air is thicker.With height it becomes lighter. Atmosphere has four layers. Lowest layer is known as kshobh mandal. It is 8 – 12 km above the polar point.

Ozone layer is 20 – 25 kilometers above ground and above 75 kilometer ozone becomes nil. Above 10 KM ozone is very less. Ozone is created when ultraviolet rays of sun mingles with oxygen above 20 – 25 kilometer height ozone is as thick as 1012 – 1013 particles in a cubic centimeter. This is ozone layer. This layer saves Earth from the ultraviolet rays of sun. Absence of equal temperature circle and ozone layer would have burnt the total life in the planet.

We can hence understand the importance of ozone circle and also existence of oxygen in formation of oxygen. Ozone Layer is protection shield for the planet. Disturbance of ozone layer hence is very dangerous for the life in the planet.

Sulfurdioxide is a colourless gas. It causes acid rain. It transforms into Hi oxide gas in air. Water content in air together with hi oxide gas produces acid.

Sulfur dioxide causes asthma and bronchitis. Taj Mahal is also in danger as a result of emission of sulfur dioxide gas from oil refineries of Mathura Acid rain in “Eeric lake” of Norway caused damage of total living being in the lake. This is 13000 square meter big lake. Gases of chimney in industries contains sulfur dioxide gas. This gas is emitted by thermal power unit and mineral oil extraction machines. Acid rain spoils the soil and kills the fertility of the soil. It pollutes the underground water also. Tree and vegetation dies gradually. For plants this gas is the most dangerous. It kills new off shoots, makes the fruits and crops poisonous. It spoils green grass thus creates problem for animals. It is a vicious circle. For lakes it is like death. It damages flora and fauna of the lake. Many buildings become weak after acid rain.

Prevention is the best cure. Let us avoid the causes of acid rain. Every factory and industry should have filter in the chimneys.Firing the fuel should be done in an alternative way so that acidic pollution is less.

Environment and nature are synonymous to each other.Environment is created by forests, trees, rivers, this again makes a climatic condition. We are breathing because trees are giving us oxygen. Rivers originate from mountains and forests. That is why plants and trees are called the lungs of nature.

Control of Air Pollution:- Poisonous gas in the city is alarmingly increasing due to the increase in number of vehicles. High rise buildings and colonization has resulted in cutting of greenery. Industries are emitting poisonous gas. To control pollution we must do plantation as much as possible.

500 meter wide green belt must be planted around industrial area. Plants to be planted in this belt are Khirni, ashapala, moulasri,subabool, Senjna, aam, sheesham, neem etc. A separate list of plants is being given below.