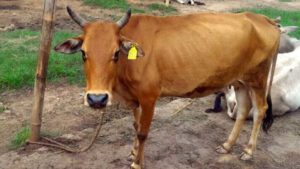 Cows are members of the sub-family ‘Bovinae’ of the family ‘Bovidae’. This family also includes Gazelles, Buffalo, Bison, Antelopes, Sheep and Goats.

Cows are raised for many reasons including: milk, cheese, other dairy products, also for meat such as beef and veal and materials such as leather hide. In older times they were used as work animals to pull carts and to plow fields.

In some countries such as India, cows were classed as sacred animals and were used in religious ceremonies and treated with much respect.

Today, cows are domesticated ungulates (hoofed animals with two toes on each hoof) that we see very often chewing the grass in farmers fields as we walk or drive through the countryside.

There is an estimated 1.3 billion head of cattle and 920 breeds of cow in the world today. Cows are referred to as the ‘fosters mothers to the human race’ because they produce most of the milk that people drink.