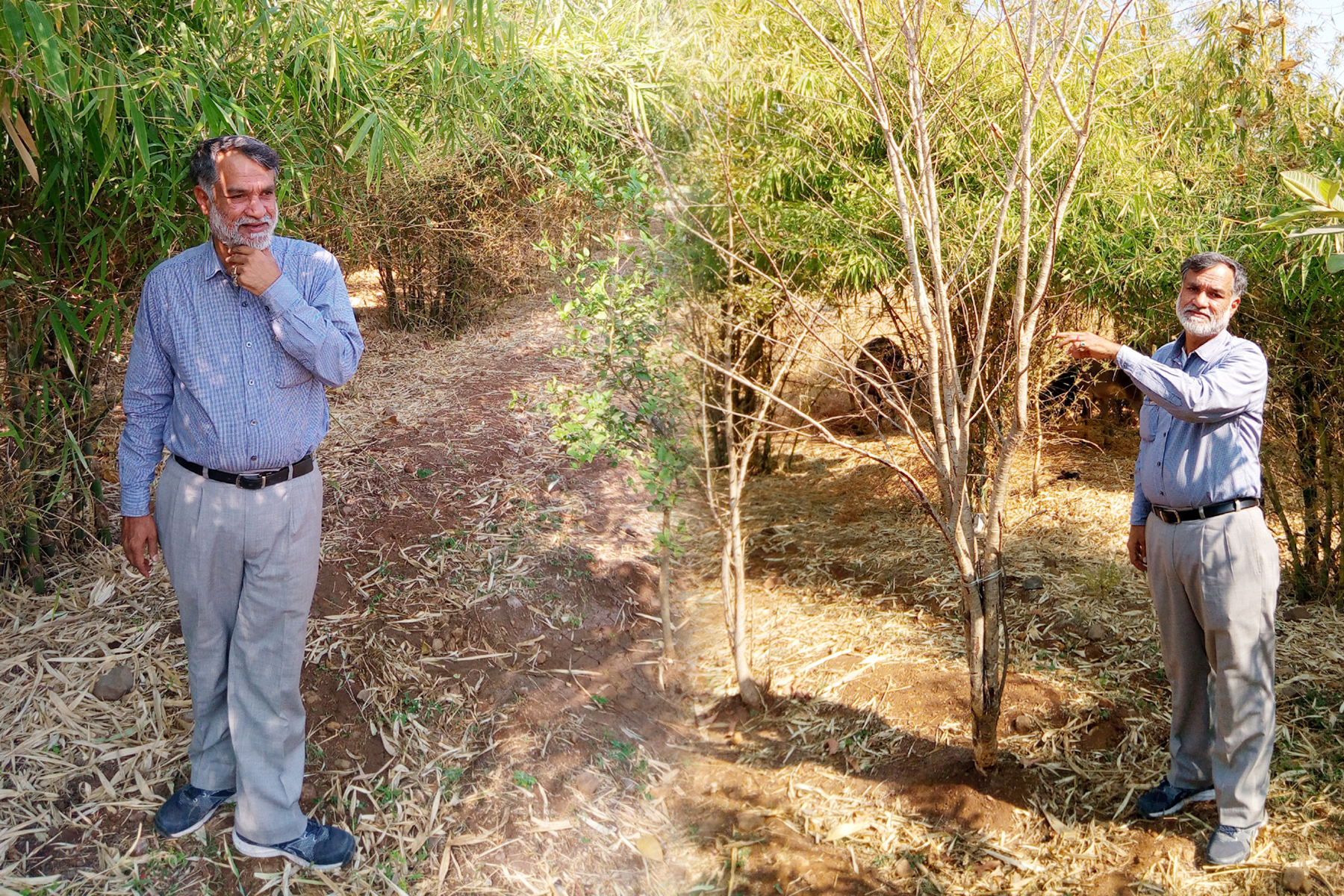 Wind, water, sunlight, earth, sky are all eternal in nature. These elements do not have anything modern or backward. Use of these elements with foresight and discretion is necessary. There are no two opinions in this. It does not have modern or old ideas. There are no generation gaps in this. There is nothing like western civilization like America and European is modern or our India is backward. Culture is like God in India. It is beyond all things. Only by protecting nature, love, we can live in the world. That means it should not be polluted. Love nature because it gives us its beauty. It gives us everything. The world should worship our culture of trees, worship gods and goddesses and understand our gratefulness. If we understand it, then we understand the world. The world talks about biodiversity today, we have always been doing it, and we will always do it. Nature has continued to provide us the means for development, but in it also the number and proportion of all the substances are limited. Excessive use of pesticides has damaged the uranium reserves that are present. Radiation waves, nitrate etc. chemicals and carbon as oxide gas etc. are also damaging the environment. The use of the human environment is only in the form of a routine through the development of civilization, it should also be protected. The beginning of a long journey only happens by taking action. Therefore, we can take a step towards preserving the environment of the world by conserving the environment around us. It is clear that the problems related to the environment are not of one person, class or society, but actually of the whole world. We feed the cow and receive milk. We nurture it by giving it proper nutrition. Our culture teaches us to do the same with the environment.

Why is our planet so pious?

Earth, water, fire, sky and air – the inferior bodies were formed from these five elements. Without living organisms, world, vegetation, tree, river, mountain etc. life is not possible. This sacred expression is a major means of keeping natural and ecological balance, so that the activities of the universe keep moving smoothly and the creature does not have a scope of threat, but today the unbalanced nature of the absence of this sacred sense is causing trouble. It is the result of overdoing that we have a serious problem of declining environment. If a man becomes accustomed to living a balanced life according to the beliefs of Vedic culture and does not unnecessarily tamper with nature then there can be no danger to the existence of his life. To maintain our existence in terms of natural equilibrium and environmental protection, it is also a very important place for trees, plants, flora, fauna and cows in life.    By accepting nature as gods and goddesses, our culture teaches us to worship, respect, honor and preserve our nature. Acceptance in the form of deity, indirectly acknowledging their importance. According to an idea of ​​Earth Sukta of Atharva Veda, ‘O Mother Earth! Whatever I will take from you, it will be that which you can be able to rebuild. I will never shock at your heart or your life force.’ Man became aware of the race of eternal truth, in the ocean of development and in human selfishness. That is, the human became directionless, and drifted away from nature. The Indian tradition of earth worship, undoubtedly inspires the land to be supremely protected and also inspires the life-saving Vasudha to be protected and protected. The earth is regarded by us as a mother and the man on it is his son. ‘There is also a big role to play in our body. ‘The transformation of one thing, even the change of one molecule, can cause irreversible changes in unrelated organs, tissues and entire mechanisms.’ But we are more focused on the symptoms that appear instantly and do not appear immediately are avoided.During the long term, the toxic substances are stored as body fat. When this deposit pulls the fat to the body’s functions, then this venom shows its effect immediately. Fat has to do a lot of work and the poison in it prevents its function. Important actions are taken only through fat, selection, energy receipt etc. The respiratory capacity of people of our country is less than 25 to 30 percent compared to the inhabitants of European countries. Our villainous lifestyle is facing the woes of the whole world. Countries with more population are becoming more and more affected. Diseases are being promoted with increasing temperature. Global warming has become a cause of many types of physical and mental illness. The air in which people breathe in Indian cities is counted in the world’s most polluted air. World Health Organization says that half of India’s population i.e. approximately 66 million people live in those areas, where micro-particle matter (particulate matter) pollution is above the safe standards of India. Among the twenty polluted cities in the world, thirteen is in India and in them the order of Delhi is also the highest. Pollution emanating from the vehicles for the urban people, pollution emanating from the industries, smoke of cigarette etc. are affecting the children and adults and are coming into the abyss due to air pollution inside the house and offices.

Recent report of Dr. Vallabh Bhai Patel Chest Institute affiliated to Delhi University is shocking. According to a report prepared under the supervision of the World Health Organization, more than five lakh people are dying of air pollution inside the home and offices, which is very much for any country in the world. It has also been said in this report that compared to pollution from outside, the lungs of 1000 times more people are getting worse due to pollution in the house. Studies conducted on 22,234 people between the infant and the age group of 65 years in five metros have found that air pollution in the house is unhealthy, and mortality rate is also decreasing very rapidly. Acute respiratory infections in children under the age of five (Acute Lawyer Respiratory Tract Infection) are a major cause of low mortality. Asthma is one of the major problems in respiratory diseases. There is a growing population of narrow lanes, more people living in smaller homes. Of the few populations, infants under age 5 are suffering from pulmonary disease for up to 12 per cent, this figure has been seen from 7 to 9 per cent in Kolkata, Mumbai, Madras. Another survey carried out in 300 schools during the breathless foundation 2002-2012 in Delhi, NCR. It included 10-14 year old children who were suffering from asthma. About 15 percent of children are suffering from asthma due to allergies within the home or self. This is due to the direct connection of asthma and packed foods such as snacks and liquids. According to Sanjay Bhatnagar of Asthma Healthcare, lungs get swollen when polluted air is inhaled. These swelling are quite fatal because these chest X-rays or any other test cannot be detected. Although inflammation does not cause any pain and does not appear, the patient feels coughing or breathing problems. The main sources to create serious pollution are chemical industry, oil refineries, molecular wastewater, garbage home, plastic industry, car industry, livestock, etc. Molecular institutions, oil tanks produce very serious pollution during accidents. Some of the major pollutants, chlorinated, hydrocarbons, heavy elements, valium, chromium, zinc, arsenic, and benzene etc. are also major pollutants. After natural calamities also pollution is generated. When waves return back after large sea storms, waste garbage waste, broken boat-cars, waste oils of oil factories, including coastal waste, etc. are taken away. Post-tsunami studies said that on the coastal fishes, the percentage of heavy elements had increased greatly. Pollutants give rise to various types of diseases. Such as cancer, eczema, asthma diseases, etc. As far as certain diseases have been given the name of the pollutant that produces them.

Due to the degradation of people’s reproductive capacity, abortion, childless couple, premature child, decrease in disease resistance, kidney failure, defect in the digestive system, premature aging, mentally retarded children, skin diseases have become almost the reality of every village in the Malwa region, while cancer is also spreading. Cows and buffaloes also have a decline in fertility, problem in pregnancy and miscarriage, lack of sterility, besides lack of milk. Indigenous hens are also giving less number of eggs.  Water, air and soil pollution has been responsible for 40 percent of the world’s deaths. In this section of evolution, man is being used today as a consumer and a customer. He has become a victim of market’s, in which economic development has become important and human development is secondary. Pollutants that reduce air pollution by reducing the life span of the air, reduce the average yield of crops like wheat by one third. Our religion is an important and vital part of our regular well-being, social beliefs and aberrations, as well as the environment and nature. In our Vedas, Puranas, Upanishads and other religious texts, there are two main elements of nature and men. The creator of the universe, Brahma is the right person and father of nature and man, therefore coordination between nature and man is essential, communication is necessary. But due to our ignorance we forget our religion and duties towards nature and environment, forgetting morality, we are getting away from nature. We are moving away from nature and human intervention on nature is increasing. Therefore there is a great need to create new thinking with the new topic on the environment. Nature and the environment then definitely play their religion. All the activities of nature are automatically accessible on time. We become bizarre when we get distracted from nature. It is a questionable whether we also play our environmental religion honestly. Do we protect and protect trees, flora and fauna? Are we able to keep clean water, air, sky, earth, amber, pollution free? Is our lifestyles natural and yoga effective? The answer will be negative for all of the above. We have to conserve natural wealth, avoid consumerism. To make a balance in natural processes, to improve culture and practice. So, each of us has to become a nature lover and environmentalist.