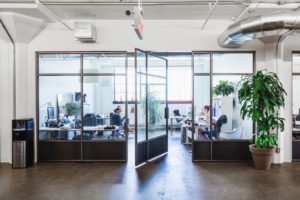 A factory,office plant is an industrial site, usually consisting of buildings and machinery, or more commonly a complex having several buildings, where workers manufacture goods or operate machines processing one product into another.

Factories arose with the introduction of machinery during the Industrial Revolution when the capital and space requirements became too great for cottage industry or workshops. Early factories that contained small amounts of machinery, such as one or two spinning mules, and fewer than a dozen workers have been called “glorified workshops”.

Most modern factories have large warehouses or warehouse-like facilities that contain heavy equipment used for assembly line production. Large factories tend to be located with access to multiple modes of transportation, with some having rail, highway and water loading and unloading facilities.

Factories may either make discrete products or some type of material continuously produced such as chemicals, pulp and paper, or refined oil products. Factories manufacturing chemicals are often called plants and may have most of their equipment – tanks, pressure vessels, chemical reactors, pumps and piping – outdoors and operated from control rooms. Oil refineries have most of their equipment outdoors.

Discrete products may be final consumer goods, or parts and sub-assemblies which are made into final products elsewhere. Factories may be supplied parts from elsewhere or make them from raw materials. Continuous production industries typically use heat or electricity to transform streams of raw materials into finished products.

The term mill originally referred to the milling of grain, which usually used natural resources such as water or wind power until those were displaced by steam power in the 19th century. Because many processes like spinning and weaving, iron rolling, and paper manufacturing were originally powered by water, the term survives as in steel mill, paper mill, etc.